skip to main | skip to sidebar

It has been so many months since I last posted here to talk about Nichole's hearing journey. I was so caught up n the end of her Senior year in high school, the college application processes, getting ready for her Freshman year at Worcester Polytechnic Institute (WPI) that I dropped the ball on this Blog. But as I think of it, that is exactly what I hoped would happen back when Nichole was newly diagnosed with a hearing impairment. Nichole grew into a young woman going off to college. Not specifically a hearing impaired girl, but an 18 year old who like all her peers was transitioning form child hood to adult hood. Facing all the same challenges, and succeeding!

Nichole was accepted to WPI early decision to pursue Computer Science. It is very tough (her mother and I both graduated from WPI). She is working until the wee hours (2 or 3am) many nights, and loving it! She is absolutely thriving in the college environment. WPI has ben great as far as accomodations. They purchased a new FM system for Nichole. She has taken the initiative to schedule a meeting with each professor before classes start each term. She explains about her hearing, shows them how to use the FM and discusses how she can get the most from their classes. She had been asking questions in class (I can hear her in one of the recorded lectures), and going back for office hours extra help. It is so rewarding to see that she is advocating for herself. And to top that off, her first term (WPI has four 7-week terms versus two semesters, and students take three classes per term) Nichole earned two A's and a C (in her intro to programming class). She was concerned with the C, but I had looked at the language they use, and it is a really strange one that has no real-world application. I suggested she put that behind her and keep going with CS classes to see if she does better as the courses progress. Sure enough, she earned an A in the next CS class during B term, along with two more As! All her hard work is paying off.

WPI also installed a remote Fire Alarm sensor with bed shaker that detects when the alarms sound in her dorm and shakes her bed. This has been one thing which has not gone smoothly. It kept false alarming, to the point where she was simply ignoring it. At my urging, she worked with the residence life people to get the unit and the remote transmitter changes for new units. That appeared to solve the problem, though as you will read below, it has since issued a false alarm again.

After Christmas break, Nichole wanted to go back a few days before classes started in order to do some pre-reading for her classes. Classes started last Thursday (1/13/11). Saturday morning, about 3:00am, our phone rang. It was Nichole. She had gone out with friends to watch a movie on campus. When they returned (about 1:00am) and Nichole put her jacket in her dorm room, on the floor by her bed. All was normal. The group hung out in the common room on her floor to chat (such a great thing for a Dad to hear about a girl with her hearing background!). About 2:30am, someone came to the common room to say water was coming out from under Nichole's dorm room door. 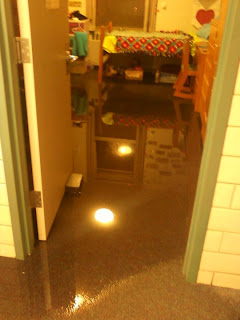 She and her friends opened her door, to get a blast of hot steam in their faces! IT took a minute for the steam to clear, before they could see the room was flooded with 2" of super hot water. The radiator had leaked. Steam had filled the room, with condensation forming on the walls, ceiling and everything in the room. If she had been sleeping, she probably would have been scalded (her roommate had gone home for the weekend). Even if she had woken up, she would have stepped into the super heated water getting out of bed. It gives me shivers to think how lucky she was to have been hanging out with her friends.


She and her friends rescued what they could from the room. Facilities game around early in the morning to vacuum up the water, and eventually replaced the radiator. They shampooed the rugs as well. Nichole came home for the day to get some sleep (after this unscheduled all-nighter), and wash all her bedding and other items (like her jacket) that had been on the floor and were soaked. Luckily the only items that were destroyed was a 19" TV we had sent to school with her, and a bedside reading lamp. Her CI gear appears to be ok, though the battery chargers for her rechargeables did have lots of pooled water from condensation in them, and one of the batteries was super hot. We will keep an eye on that one, as WPI has offered to replace anything that got damaged by the flood. Oh, and the fire alarm bead shaker went off. 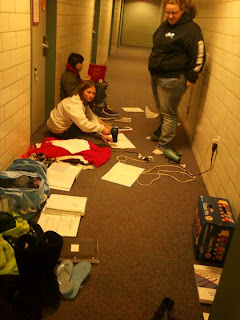 o now I am thinking that a fire alarm bed shaker is not the only thing she needs. A high-temp warning feature, and maybe even a Carbon Monoxide and smoke add ons to the alarm system would be a good idea. Maybe even a doorbell flasher type device so that if she were in the room and someone needed to rouse her, they could hit the button and it would shake her bed. But of course that would present an annoyance factor as anyone walking down the hall at night could simply hit the button (the old ring and run game) just to be a pain. Does anyone else have these type of "features" for their kids who are in mainstream colleges?

That is all for now.
Posted by deanatmcdotcom at 10:10 AM 12 comments: